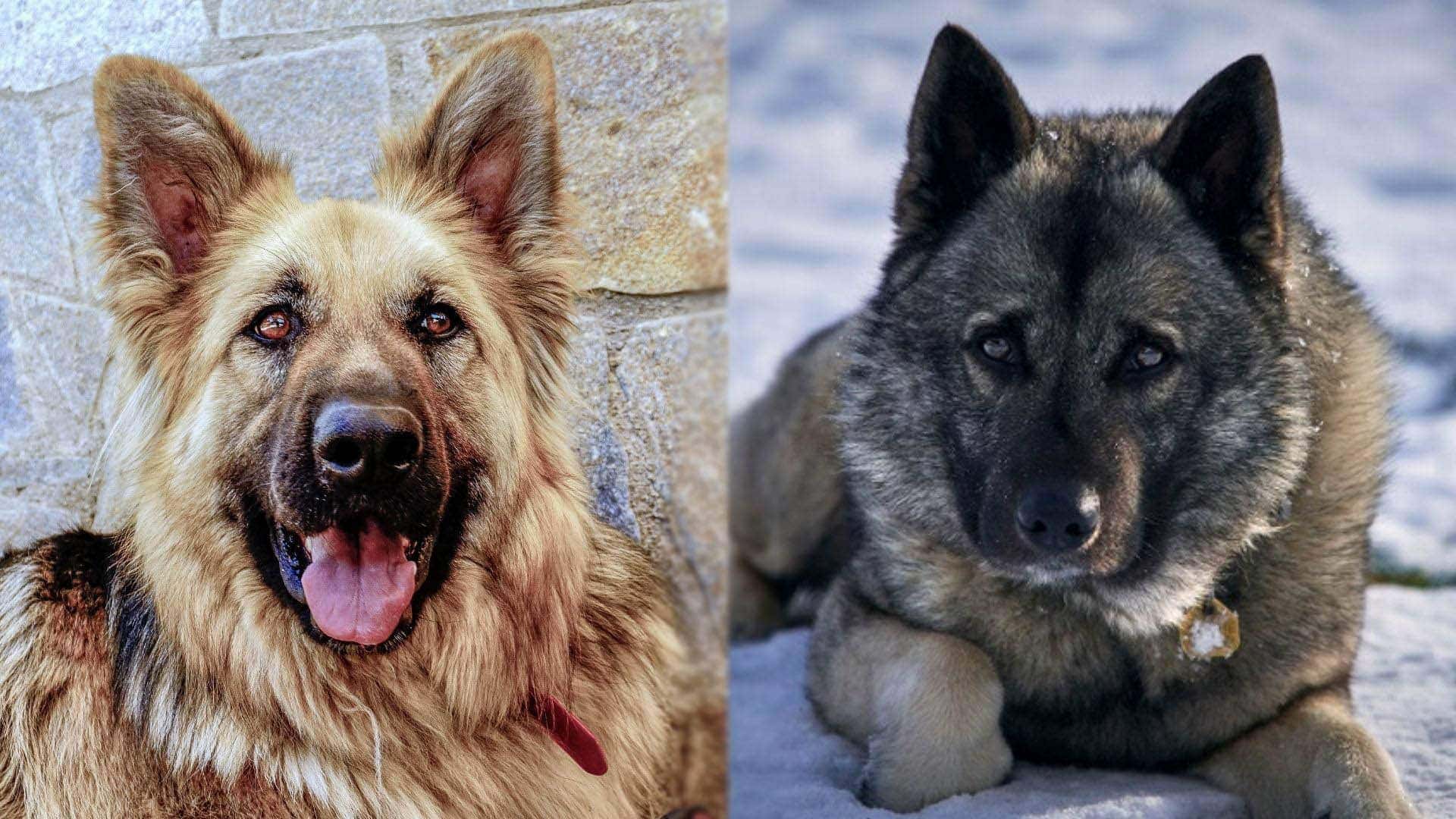 The German Shepherd is one of the most well-known dog breeds, while the Norwegian Elkhound is lesser known. Both of these breeds have distinct personalities and a drive to work hard. Combining these breeds can create a loyal dog that’s ready to protect and learn. However, these breeds are strong-willed and are not ideal for new dog owners, so it’s important to understand what you’re getting into before bringing a Norwegian Elkhound and German Shepherd mix home. Consider the activity and training needs of these dogs to ensure you are setting yourself and the dog up for success.

Finding one of these pups may be difficult due to the rarity of Norwegian Elkhounds in most areas. There are not currently any major breeding programs creating these breed hybrids. It’s possible to find one of these dogs through a rescue or shelter if they were surrendered by an owner who got the dog without realizing its needs, so you’ll end up spending $40 – 200 depending on the cost of adoption in your area. You may be able to find someone who is purpose breeding these dogs for work, so expect to spend a few hundred dollars in this case.

This breed originated in Norway, and they are believed to have originated somewhere around 5,000 – 4,000 BCE. In fact, the remains of a skeleton resembling a Norwegian Elkhound was found among the stone age tools in a cave in Norway. These dogs were companions of the Vikings and were often spoken of in myths and legends. They historically have served as hunting dogs to track large animals like elk, moose, and deer. They have also been used as herding dogs and livestock guardians, defending flocks against large predators like bears.

They were originally considered herding dogs, but in the 1800s the breed began becoming more and more refined, eventually creating the dog we know today. They are highly versatile dogs that can do just about any job you throw at them, but they have been bred far away from their original herding roots. Some people use them as farm guardian dogs because of their protective and loyal nature, but there are many dogs that are far better options for herding.

3. One Breed is a Westminster Champ

Are These Dogs Good for Families?

Also: Do dogs remember getting in trouble

This mix can be good for families with a proper understanding of their needs. German Shepherds and Norwegian Elkhounds are both breeds that love to be with their family and usually bond strongly to the whole family. While German Shepherds are typically good with children, Norwegian Elkhounds are less tolerant of children. These dogs would likely do well in a home with older children that understand proper dog etiquette and when to give the dog its space. Small children, especially those without an understanding of how to act around dogs, may be at risk for a bite if they push the dog’s comfort level. Keep in mind that the levels of protection and wariness these breeds exhibit may make them wary of strangers, including family and friends, so be prepared for visitors with high-value rewards and praise.

Does This Breed Get Along with Other Pets?

Both parent breeds can be hit or miss with other animals, especially dogs, so the pups will likely be the same way. Proper socialization at an early age and positive encounters with other animals will help give you the best chance of your dog accepting other animals. When it comes to small animals, these dogs may play too rough or see the animals as prey, making them a poor fit for homes with small animals like rabbits and guinea pigs. However, with proper supervision and introductions, they may be able to live harmoniously. Early introductions and proper socialization seem to be key when it comes to successfully keeping these dogs with other animals.

These are large breed dogs that need a high-quality diet. If your dog is highly active or works, then it will likely need a diet that is higher in calories and protein than a typical dog food, so look for sport foods. Dog kibble is generally the recommended dietary base for dogs because it is nutritionally balanced. Look for foods with whole proteins, like beef, chicken, and fish, as the first few ingredients. Talk to your veterinarian about what type of food will work best for your dog and how much you should be feeding.

For this mix, you’d better be ready to run! These dogs need activity every day, whether it’s a job, a sport, or a run. Without proper exercise, they will have too much pent-up energy and may become anxious, destructive, or excessively noisy. Teaching your dog games and providing new and fun toys can keep play sessions interesting. Plan to take your dog for a walk or run every day when the weather allows. When the weather doesn’t allow for outdoor activities, then indoor games and puzzles are an effective way to tire your dog out.

This mix of dogs can be strong-willed, so be prepared for difficult training. Providing balanced training with high-value rewards is the best way to train these dogs. High-value rewards can be special treats or favorite toys, anything that makes your dog focus on you above everything else. It’s important to start training young to avoid having a large dog that you can’t control later on. These dogs get large and are from two powerful breeds, so it’s necessary to have your dog under verbal and physical control to keep it safe.

Also: What is the best food for parakeets

German Shepherds and Norwegian Elkhounds are both double-coated breeds, so they require routine brushing and bathing to keep their coat clean and clear of mats. The mix of the two breeds is no different and you will have to be vigilant about coat care to prevent skin infections and painful matting. This is especially true if your dog’s coat is more like the Norwegian Elkhound or a long-haired German Shepherd.

Like most dogs, there are not many significant differences between males and females. Overall, female dogs are considered to be more protective and less outgoing than male dogs, potentially due to their instinct to protect their pups. Females often mature faster than males, which means they may outgrow the “puppy phase” faster. Males may be slightly easier to train than females, though, due to their generally affectionate nature and desire to please.

In the wrong hands, a Norwegian Elkhound and German Shepherd mix can be a disaster. This is a high energy, strong-willed dog that isn’t for the beginner dog owner. If you understand the needs these dogs have, though, and are willing to put in the time and work to train them and keep up the coat, then you won’t be disappointed. This mix creates a loyal dog that may be wary of strangers but will love nothing more than to spend time with its family. You may have difficulty finding this mix of dogs via everyday means, so you may have to find someone who is purpose breeding this mixture.

Also: Why do I hold my face when I sleep